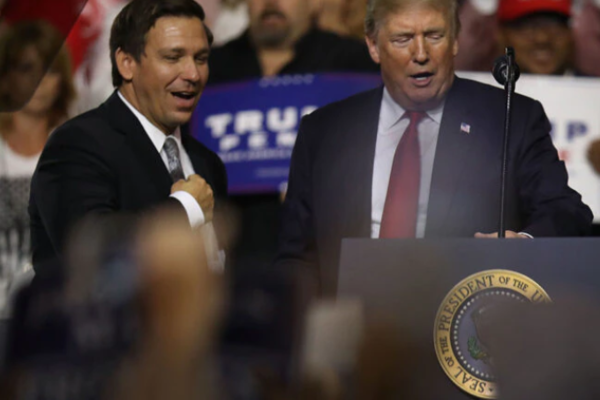 WOW: Trump Comments On Ron DeSantis – This Is HUGE!

Former President Donald Trump suggested that current Florida Governor Ron DeSantis would be “good” as a Vice President, suggesting he’s inclined to select DeSantis as his running mate in a 2024 campaign to return to the White House.

“I think Ron would be good,” said President Trump of DeSantis, mentioning that there were a “lot” of folks who could be good vice presidential candidates.

President Trump also spoke about the prospect of running with Mike Pence as his Vice President again, suggesting that a ticket with Pence would be “tough.” Trump referred to his belief that Pence could overturn the electoral college votes processed on January 6th, referencing negative reactions Pence incurred from some conservatives for declining an attempt to block the congressional certification of the election.

“I think Mike has been very badly hurt, with respect to what happened on January 6th… I think he’s been mortally wounded, frankly. Because I see the reaction he’s getting from people… They say, ‘why didn’t you just hand it back to the legislatures?’”

Opinion polling has consistently shown Donald Trump with a decisive electoral lead in the upcoming 2024 GOP primary, garnering outright majorities of support in a fashion likely to deter GOP challengers from seeking the nomination. Only unpopular former Governor Chris Christie has openly suggested he’ll run for President, potentially providing Trump with a cakewalk to the nomination.

Trump also suggested that a 2024 campaign was a strong possibility during the event, reiterating his belief that he won the 2020 election. The President also defended the efficacy and medical use of the coronavirus vaccines, in a development that met some boos from the sellout crowd present.