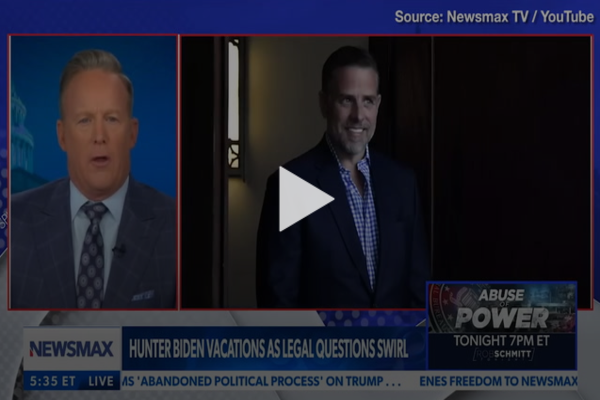 In an interview with Newsmax on Thursday, Peter Schweizer alleged Hunter Biden has acted as a lobbyist for foreign entities based on evidence from his laptop and commercial activities, and has violated the law, namely the Foreign Agents Registration Act (FARA).

“There have been Americans over the last five, six years, especially, that have gone to jail for doing far less on that front than Hunter Biden himself has done,” Schweizer said. “Not to mention the tax evasion and the questions about foreign corruption.”

“It’s wildly inconsistent and it seems like it depends on whether you have a ‘D’ or an ‘R’ after your name what kind of experience you’re going to have with law enforcement.”

Schweizer was among the first to report extensively on the Biden family’s foreign business dealings in the books Secret Empires and Profiles in Corruption.

Last year, he said the GAI had confirmed that President Joe Biden “was a direct beneficiary” of Hunter Biden’s financial deals with foreign interests.

Hunter Biden is the subject of a brand new narrative film My Son Hunter, marking Breitbart’s expansion into film distribution. It’s the story the establishment media doesn’t want you to see. It’s available for PRE-ORDER NOW at MySonHunter.com. The film becomes available for Streaming and Downloading  September 7.