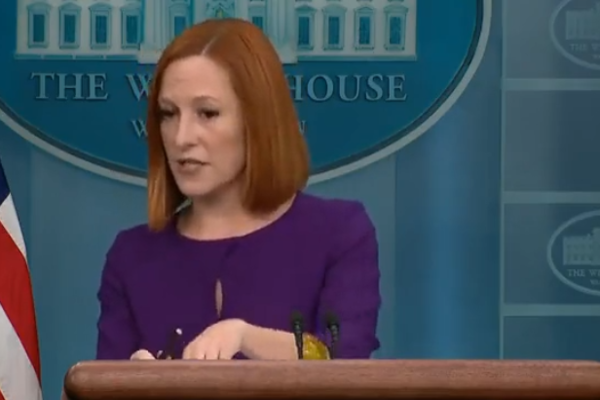 (trendingpolitics) – White House Press Secretary Jen Psaki continues to incite an “insurrection” at the Supreme Court by encouraging protesters to go to justice’s homes, despite reported threats against their lives. Watch:

“So, I know that there’s an outrage now, I guess, about protests that have been peaceful to date,” Psaki said. “We certainly continue to encourage that outside of judges’ homes and that’s the president’s position.”

However, there are a number of threats that have been made against conservative Supreme Court justices who intend to strike down landmark abortion cases Roe v. Wade and Planned Parenthood v. Casey.

As reported by El American, progressive journalist Simon Gwynn reacted to a leaked draft of the upcoming Supreme Court decision by asking about possibly killing two Supreme Court justices. Do You Believe the Biden Administration is Making the US look Weak?* Yes! No Email* This poll gives you free access to our premium politics newsletter. Unsubscribe at any time.

“If you had the chance to kill Clarence Thomas and Samuel Alito, the two oldest right wing Supreme Court judges should you do it while Biden can get his nominees to replace them confirmed?” Gwynn asked. He later removed the tweet.

“FYI I don’t endorse murdering anyone, but don’t think there’s anything wrong with thought experiments,” he added after deleting the tweet.

As reported on Sunday, Supreme Court Justice Samuel Alito was reportedly moved to an undisclosed location out of safety concerns. The precautionary measure was taken after radical pro-abortion activists mobilized to intimidate conservative justices who are poised to overturn Roe v. Wade.

Pro-abortion activists, including the left-wing group called Ruth Sent Us (named after the late Justice Ruth Bader Ginsburg), have been activated to illegally intimidate the five justices expected to render the majority opinion in Dobbs v. Jackson Women’s Health Organization.

On Saturday, pro-abortion activists protested outside of the homes of conservative Supreme Court justices Brett Kavanaugh and John Roberts. The protests erupted after an unprecedented SCOTUS leak indicated that Roe v. Wade and Planned Parenthood v. Casey were about to be struck down.

The activists shouted slogans such as “we will not go back” and carried picket signs. At Kavanaugh’s home, some of the protesters attempted to intimidate the Supreme Court Justice, shouting lines such as “we see you, buddy!”

The Washington Post revealed the identity of one organizer and sympathetically depicted her activities without noting that personally pressuring a Supreme Court Justice to render a given outcome is illegal.

“Lacie Wooten-Holway walked through Chevy Chase on Wednesday night, pausing to stick fliers on her fence, a tree and utility boxes,” WaPo reported. “She was advertising an abortion rights protest here, in her neighborhood, in front of the home of Supreme Court Justice Brett M. Kavanaugh.”

“We’re about to get doomsday, so I’m not going to be civil to that man at all,” she told the Post.

A neighborhood activist protesting at a Supreme Court Justice’s home is one thing, but the White House and the Justice Department giving such potentially illegal activities their tacit blessing is quite another. Legal analyst Jonathan Turley put the protests into perspective.

“In this case, the Biden administration and the Justice Department have condemned the court’s leaked draft — but not the threatened protests at justices’ homes, even though those arguably could be treated as a crime,” Turley wrote. “Under 18 U.S.C. 1507, it is a federal crime to protest near a residence occupied by a judge or jury with the intent to influence their decisions in pending cases, and this case remains pending. (Ironically, prosecution could be difficult if the protesters said they had no intent other than to vent anger.)”

“Even if protests at justices’ homes are constitutionally protected, that does not make them right,” he added.

Yet on Friday, the Speaker of the House Nancy Pelosi appeared on MSNBC with host Nicolle Wallace. Pelosi hinted to radical protesters that they should mobilize ‘public sentiment’ to influence the court.

“We have to have the clarity in what this draft decision means, so that what the final decision doesn’t go that far,” Pelosi said.

“The chief justice has said, this is, this is authentic, but it is not final,” she went on. “I don’t know if he is word authentic. It’s real, but not final.”

“So again, Lincoln said public sentiment is everything with it,” she continued. “You can accomplish almost anything — without it, nothing — and women just have to weigh in.”

Speaker Pelosi’s words come in the aftermath of heated protests at the Supreme Court building, which spurred the court’s officers to erected barricades and high fencing to maintain the court’s security.

White House Press Secretary Jen Psaki, who is soon departing her office to join far-left media outlet MSNBC, was asked on Thursday about protests at the Supreme Court Justice’s homes, which were facilitated by doxxing their addresses.

“I don’t have an official U.S. government position on where people protest,” Psaki said, adding that “peaceful protest is not extreme.”

“These activists posted a map with the home addresses of the Supreme Court justices. Is that the sort of thing this President wants?” Doocy asked.

“I think the President’s view is that there is a lot of passion,” Psaki said. Her glib response was essentially a tacit endorsement.

Supreme Court Justice Clarence Thomas this week delivered a rare public message to those who would compromise America’s institutions.

Thomas, speaking at the 11th Circuit judicial conference in Atlanta this week, directed his message towards those who seek to ‘bully’ the court — a reference to those who leaked a draft opinion that a SCOTUS majority aims to overturn landmark abortion decisions.

“We can’t be an institution that can be bullied into giving you just the outcomes you want. The events from earlier this week are a symptom of that,” Thomas said.