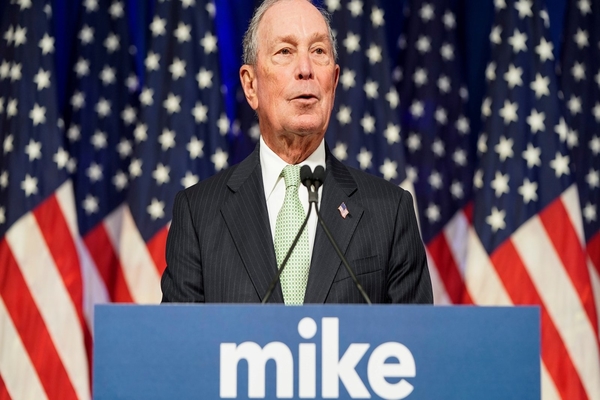 The revelation is part of a broad investigation by ProPublica that gives a glimpse into the tax loopholes that the richest 400 Americans utilize every year to dodge billions in federal income taxes that most Americans are required to pay.

“To make it into the top 400, each person on this list had to make an average of at least $110 million each year,” the investigation states. “A typical American making $40,000 would have to work for 2,750 years to make what the lowest-earning person in this group made in one.”

Bloomberg, ProPublica reports, “achieved one of the lowest tax rates in the top 400” richest Americans from 2013 to 2018 “partly by taking annual deductions of more than $1 billion, mostly through charitable contributions.”

During that time frame, Bloomberg paid an average federal income tax rate of just four percent — less than half the rate that the average American taxpayer, at 13.3 percent, pays every year. In fact, Bloomberg’s average rate is just 0.5 percent more than what the bottom 50 percent of income earners pay on average.

Bloomberg’s massive tax breaks are thanks to provisions signed into law by former Presidents George W. Bush and Donald Trump.

The Trump provision, slipped into the Tax Cuts and Jobs Act at the behest of Sen. Ron Johnson (R-WI), allows the owners of so-called “pass-through” companies to deduct up to 20 percent of their profits. As a result, the owner keeps an extra seven cents on every dollar of profits.

“Tax records show that in 2018, Bloomberg, whom Forbes ranks as the 20th wealthiest person in the world, got the largest known deduction from the new provision, slashing his tax bill by nearly $68 million,” ProPublica reports.

Bloomberg is not the only billionaire to get a tax boost from the provision. Treasury Department economists have found that 60 percent of the provision’s tax savings have gone to the top one percent of American income earners.

“That’s because even though there are many small pass-through businesses, most of the pass-through profits in the country flow to the wealthy owners of a limited group of large companies,” ProPublica reports.

As Breitbart News has chronicled for years, research has consistently shown that the wealthiest Americans today pay an overall lower tax rate than all other Americans. Meanwhile, American middle class wealth has dropped to a historic low.