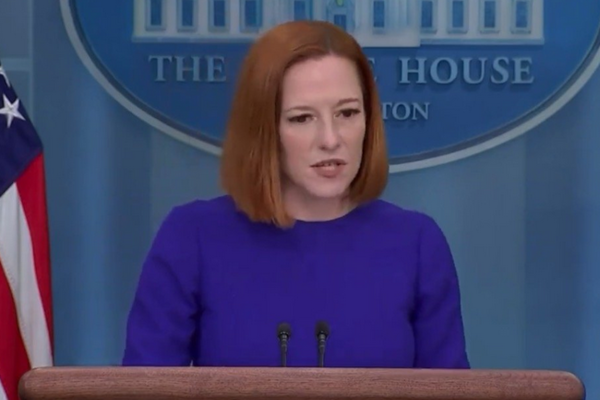 Watch: Psaki Gives Bizarre Response When Asked about the Cost of Oil

(trendingpolitics) – When asked about the problematic oil prices during a recent press conference, prices so high that the cost of a barrel of oil is nearing $100, far above what it was during the Trump Administration, Paski not only gave her typical non-answer but also tried to play it off as not a problem because of “green energy.”

It began when a reporter pressed her on how Biden is dealing with oil prices by releasing oil from the Strategic Petroleum Reserve, something that so far hasn’t been effective, asking:

“So, President Biden said with oil prices, that he released the Strategic Petroleum Reserve and that brought down prices. It was actually on that day the price of oil actually rose, and it went down for the Omicron variant as the fears of lockdown.

Today oil prices are $91, more than $91 a barrel. Are other any considerations from the administration for reversing any of the policies or regulations or removing some to encourage more drilling in the U.S. for future demand?”

Psaki gave one of her typical responses, attempting at the same time to both dodge the question and present the issue as not really a problem and, in the process, failing at both. She, instead of answering the question and saying whether Biden will encourage more oil production, said:

“Well, let me tell you what we are doing. Of course, we of course tapped the Strategic Petroleum Reserve, sometimes that takes some time to be digested into the system. Should Trump run for president WITH DeSantis as VP?* Yes No Email* This poll gives you free access to our premium politics newsletter. Unsubscribe at any time.

We’ve also worked with the number of countries around the world to do something similar. We been engaged with OPEC nation countries about the need for the supply available to meet the demand.

We’ve also called out the record profits made by oil companies, which should not be lost as an issue, as consumers are looking at the price that they are paying at — the prices they are paying. And I would also note that you should check with oil companies and whether they are tapping into all of the land leases they have available at their disposal. I don’t believe they are.”

Ah, so Psaki, rather than saying whether the US would let more drilling occur or lighten regulation to stimulate more oil production, is proudly saying we’ve begged OPEC to do the dirty work and release more oil while also blaming companies for not doing more. As always, the fault is someone else’s.

The reporter, however, was unwilling to let her off the hook that easily, again asking “What about encouraging investment in drilling in other places in the U.S.?”

Psaki refused the oil question and instead turned to pining after a “clean energy transition,” saying:

“Again, I think the President’s view is that we are — it is a huge advantage to us to be a leader in clean energy transition, and over the course of years and decades we become a clean energy superpower because, ultimately, that’s not just where the jobs are, it’s where the strategic advantage will lie in 10, 20, 30 years. I would note again — and you can ask the oil companies this — there is land they’re not all drilling on, every lease is not used. I’d encourage you to ask them that question.”

Don’t want to pay $4 for a gallon of gas? Well too bad; if begging the Russians and Saudis doesn’t work, you’re going to have to wait until that “clean energy transition” occurs.

Previous article
BREAKING: Joe Biden Sends Message To Americans In Ukraine – This Is Troubling
Next article
MUST SEE: Biden Embarrassing Slip Up During NBC Interview(VIDEO)