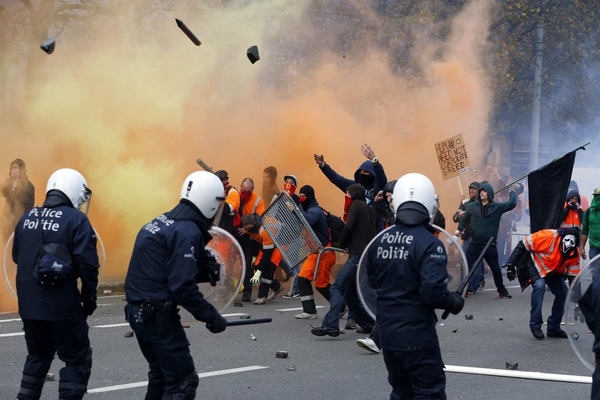 (breitbart) – Mass demonstrations erupted across Europe on Saturday with protests being staged in Vienna, Rome, and The Netherlands as governments across the continent reimpose lockdown restrictions and introduce draconian vaccine measures amid rising cases of the Chinese coronavirus.

An estimated 38,000 people marched on the Wiener Ring on Saturday in Vienna against the imposition of new lockdown restrictions. Organisers of the event claimed that as many as 100,000 people turned up for the protests.

The Austrian newspaper Kronen Zeitung reported that there were at least ten arrests during the protest, as demonstrators clashed with police, who were reportedly attacked with fireworks.

The protest in Vienna came after the recently installed Chancellor of Austria, Alexander Schallenberg, imposed a nationwide lockdown and announced that starting in February, vaccinations will become mandatory on pain of fines and possible prison sentences.

In Rome, approximately 4,000 people gathered in the Circus Maximus, with chants of “liberty” ringing out in the ancient stadium, according to the local Il Messaggero newspaper.

The demonstration also saw pro-Trump banners and featured slogans such as “people like us never give up”.

Violent scenes were once again seen across The Netherlands after a night of rioting on Friday evening in Rotterdam. At least 19 people were arrested in The Hague, amid reports of widespread vandalism and attacks on police officers, five of whom were injured, according to De Telegraaf.

Chaotic scenes were also witnessed in the fishing town of Urk, where 16 were arrested as demonstrators shot fireworks at the heavy police presence.

Around 2,000 people also protested in Zurich, Switzerland, with other demonstrations being held across the country ahead of a national referendum on vaccine passports to be held later this month.

Protests were also held in Britain, with marches seen in Manchester and in London, where anti-vaccine passport protesters gathered outside the Austrian Embassy.