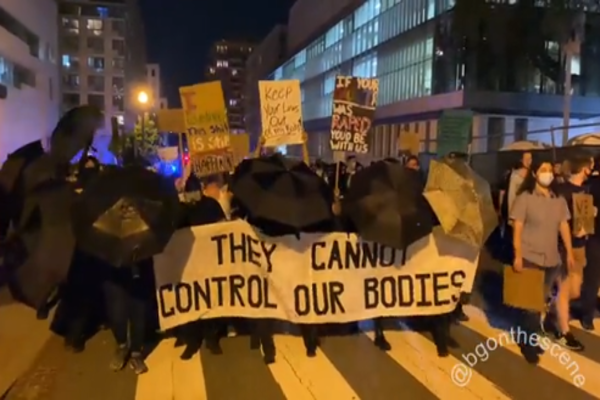 WARNING: Night Of Violence Across America – Protesters Take Too The Streets

(breitbart) – Pro-abortion protests erupted in cities across the country on Friday evening. Thousands gathered in the nation’s capital alone, as activists burned the American flag and called to burn precincts “to the ground” in the wake of the Supreme Court overturning Roe v. Wade.

Holding a sign reading, “They cannot control our bodies,” protesters in D.C. took it to the streets — an action far-left lawmakers actively called for — shouting “every city, every town, burn the precinct to the ground”:

According to reports, thousands of pro-abortion activists have gathered outside of the Supreme Court, as riot buses are reportedly on standby, anticipating left-wing chaos:

Groups of individuals wearing all black, masks, and goggles were also spotted among the protesters:

Protesters were also spotted burning the American flag in D.C.:

President Biden’s Department of Justice has also vowed to “use every tool at our disposal” to protect a woman’s ability to terminate her pregnancy.