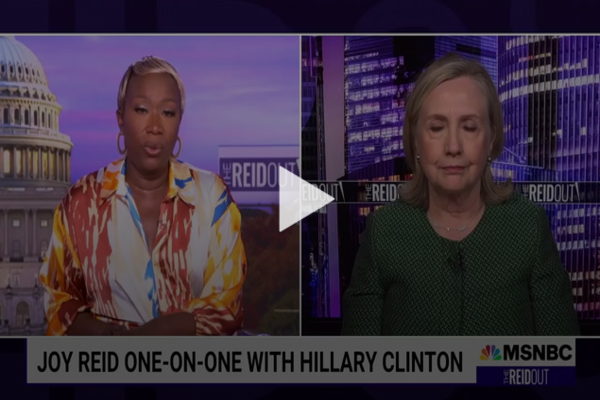 WARNING: A ‘Threat to the Heart of Our Democracy’ – Top Democrat Does It AGAIN

Former Secretary of State Hillary Clinton said Tuesday on MSNBC’s “The ReidOut” that the Republicans’ “crazy violent hate rhetoric” was a “threat to the heart of our democracy.”

Clinton said, “There always been a streak of violence, of racism, misogyny, antisemitism, as you said, but I think what we’re seeing today, and it has certainly been thrown into very high relief by the horrific attack on Paul Pelosi, is not just an aberration where one or two people or a small group engage in that kind of violent rhetoric and urge people to take action against political figures like her, like me, like others, we’re seeing a whole political party.”

She continued, “The level of just plain crazy violent hate rhetoric coming out of Republicans. You played something from the candidate, the Republican candidate for governor in Arizona. I want viewers. I want voters to stop and ask themselves, would we trust somebody who is stirring up these violent feelings, who is pointing fingers, scapegoating, making a joke about a violent attack on Paul Pelosi.”

Clinton added, “What we have with the rhetoric coming from the Republican candidates, from their party right now, is so disturbing. I didn’t see a big outpouring on the part of elected officials to stand with Nancy Pelosi the way she has stood with Republicans as well as Democrats in times of real terror, like on January 6. And so, ask yourselves, please, why would you entrust power to people who are either themselves unable to see how terrible it is that someone would be attacked in their home or don’t really care because they think it will somehow get them votes that will get them elected? This is a real threat to the heart of our democracy.”