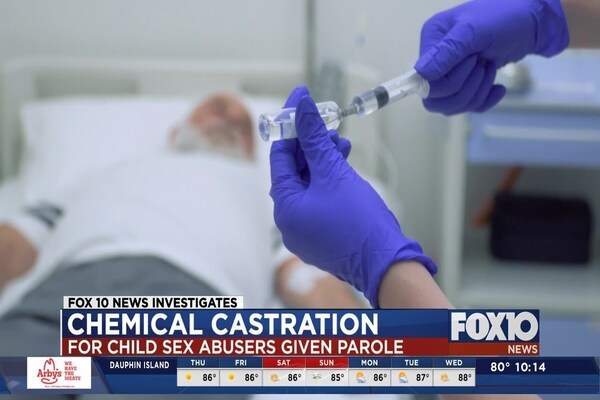 (breitbart) – The American Civil Liberties Union (ACLU), which previously opposed the administration of a drug to chemically castrate sex offenders, is now advocating for children to be able to take the chemically castrating drugs as puberty blockers.

Just one year ago, the ACLU was previously a vocal opponent of a law in Alabama that mandated chemical castration on certain convicted sex offenders.

Former Executive Director of the ACLU of Alabama Randall Marshall called the practice of chemical castration “medical experimentation,” also claiming that it “has no basis in the medical community.”

The drug that was to be used for chemical castration is called medroxyprogesterone acetate, and it is also used as a puberty blocker. One study notes that the drug “is a widely used progestin in feminizing hormone therapy.”

But while the ACLU has vocally opposed the use of medroxyprogesterone acetate on convicted sex offenders, the organization has called “gender affirming care” for children, which includes the use of puberty blockers, “medically necessary” and even “life saving.”

Chase Strangio, the deputy director of the ACLU LGBTQ and HIV Project, spoke out in favor of what is euphemistically called “gender affirming care” on behalf of the organization.

The ACLU joined two other organizations in filing a lawsuit that challenges Texas Governor Greg Abbott’s directive stating that sex change attempts on youth are a form of child abuse.

One common medical intervention that is performed on children struggling with gender dysphoria is the administration of drugs that are used off-label as puberty blockers.

Medroxyprogesterone acetate isn’t the only drug that has been used both for chemical castration and puberty blocking however.

Leuprolide acetate, referred to as Lupron, is commonly used off-label as a puberty blocker. It has also been used to chemically castrate sex offenders.

Several other members of the Pritzker family have advanced the transgender movement and the Pritzker Foundation has given $15 million to Chicago’s Lurie Children’s Hospital, which assists in sex change attempts.

The $101,000 donation to the ACLU from Pritzker specifically went towards fighting what was referred to as “anti-transgender” laws in Tennessee. The ACLU has also received $15 million from Jon Stryker, the heir to a medical technology empire, who gave the money to fund the ACLU’s attempt to counter state bills that oppose transgender ideology.