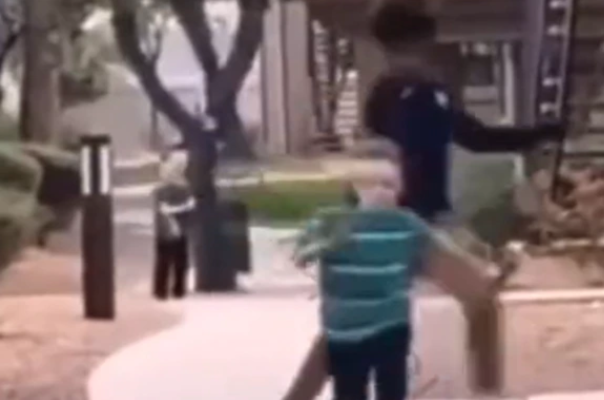 (bigleaguepolitics) – A Twitter mob is celebrating an act of black-on-white terror against a 10-year-old boy, in a sign of things to come as multiculturalism takes hold over the West.

In the video of the attack, the user posting it on Twitter claimed that the young white child said a racial slur in order to gin up the mob. They, of course, celebrated the violence, having been propagandized with anti-white propaganda for years to the point of where they want children to suffer because of their white skin.

The disturbing video can be seen here:

Black Guy Chased Down 10 Year Old Little Boy And Slapped Him For Calling Him The N-Word! DID HE DESERVE THAT? pic.twitter.com/Gj5zO1sgIU— BEST UPCOMING FIGHT PAGE 🔰 (@trendingfightz) November 26, 2021

Here are some of the disgusting replies from racists who celebrate the vicious beating of a young white child:

However, some voices of reason did point out there was no evidence the white child said any sort of a racist slur, and that the violence would not be warranted even if a racist slur were said:

Big League Politics has reported on the burgeoning industry of blood libels and hate hoaxes designed to create a justification for increased violence against white people as Western Civilization is destroyed by design:

“Data from the Federal Bureau of Investigation (FBI) has shown a stunning 41 percent increase in anti-white hate crimes from 2019 to 2020.

The FBI Crime Data Explorer tool shows that there were 761 incidents of anti-white hate crimes in 2019. This increased to 1,072 incidents in 2020 as the Black Lives Matter pogroms swept across the nation.

This animus against white people is being driven by an industry of hate hoaxes and blood libels that fuel the racist fire that is being used to tear America apart at the seams by design.

Big League Politics has reported about the re-invention of the Tulsa race riots of 1921, which have been fictionalized for the purposes of demonizing white people…

The results of Tuesday’s election may show that the hate hoax and blood libel industry is starting to backfire. Americans are getting sick of the propaganda of the far-left designed to divide.“

As the West becomes increasingly wokified, these are the sort of values that will take hold. No white child is safe due to the rise of groups like Black Lives Matter.