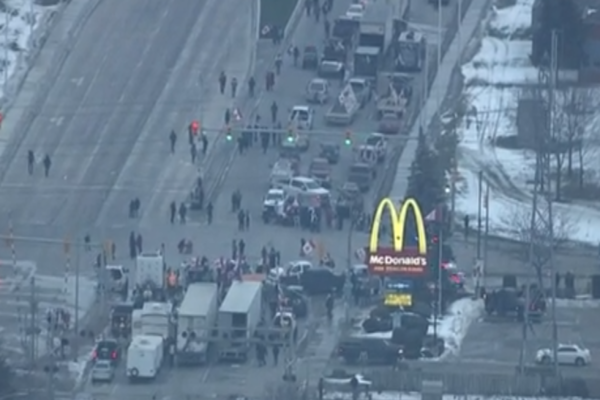 (breitbart) – Canadian service members taking part or voicing support for the trucker protests against vaccine mandates are being investigated, according to a Canadian news outlet.

The National Post reported this week that nine members of Canada’s military have been “identified” as either allegedly taking part in the protests or voicing support on social media, and that military police have launched two investigations.

Those who disregard these principles not only demonstrate an extreme lack of understanding of the military profession, they undermine the very foundation the Canadian Armed Forces.  Any member of the armed forces who brings discredit to the CAF through either conduct or performance deficiencies, be it through actions or words, will be held accountable.

Consequences could include discharge from the military.

The Post reported that some of those being investigated are already in the process of leaving the Canadian Forces, since they have refused a requirement to be vaccinated.

Those reportedly being investigated include troops appearing in uniform on videos posted to social media expressing support for the protests led by truckers, and speaking out against Canadian politicians.

The Post reported that two serving members of the Canadian military’s elite counterterrorism unit are under investigation for allegedly taking part in protests in Downtown Ottawa. Retired and serving Canadian Forces personnel were the ones who reportedly sounded the alarm.

Another reservist is under investigation for allegedly donating to the truckers protesting.

After the January 6 protest, Defense Secretary Lloyd Austin launched an effort to “root out” extremists from the U.S. military, and ordered a force-wide “stand-down” where commanders spoke to troops about extremism. Austin also stood up the Countering Extremism Working Group to examine extremism in the military. The CEWG found, after about a year of study, that there were fewer than 100 service members who engaged in “extremist” activities.

The U.S. military is also cracking down on service members who are refusing to comply with the Biden administration’s coronavirus vaccine mandate. So far, more than 1,000 service members have been discharged for not complying.

The Post reported that in May 2021, a Canadian Forces member who called on fellow service members to not assist with distributing vaccines was charged with an offense related to mutiny, in the first time the Canadian military has used such a charge.