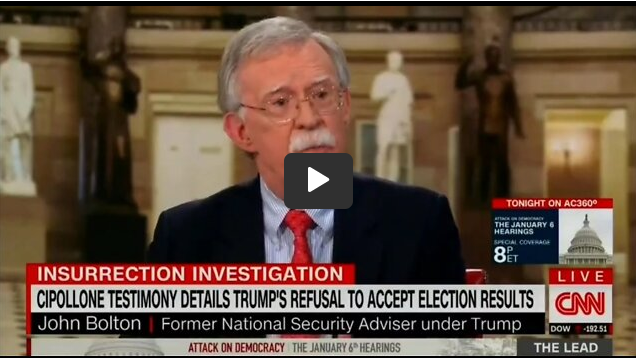 MUST WATCH: John Bolton Admits It Live On TV – This Is Insane

Bolton told host Jake Tapper he did not think Trump’s actions leading up to the January 6 House Select Committee rose to the level of a coup.

Tapper pushed back in the exchange, arguing one did not have to be “brilliant” to attempt a coup, referring to Trump. However, Bolton insisted one did have to have his wits about him.

“It’s not an attack on our democracy,” Bolton said. “It’s Donald Trump looking out for Donald Trump. It’s a once-in-a-lifetime occurrence.”

“I don’t know that I agree with you, to be fair, with all due respect,” Tapper responded. “One doesn’t have to be brilliant to attempt a coup.”

“I disagree with that,” Bolton replied. “As somebody who has helped plan coups d’état – not here, but other places – it takes a lot of work. And that’s not what he did. It was just stumbling around from one idea to another. Ultimately, he did unleash the rioters at the Capitol. As to that, there is no doubt. But not overthrow the Constitution to buy more time to throw the matter back to the states to try to redo the issue.”

“If you don’t believe that, then you’re going to overreact, and I think that’s a real risk for the committee, which has done a lot of good work mostly when the witnesses are testifying, not when the members are opining,” he added. “It is invariably the case when you go too far trying to prove your case. You undermine it.”