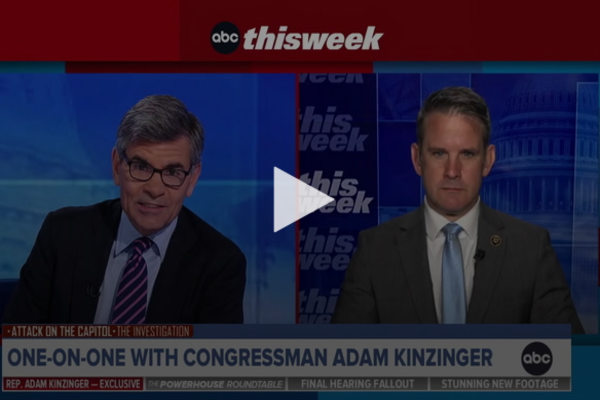 (breitbart) – Representative Adam Kinzinger (R-IL) said Sunday on ABC’s “This Week” that a criminal referral from the January 6 House Select Committee was not necessary because the Department of Justice is going after former President Donald Trump “pretty hard.”

Anchor George Stephanopoulos said, “President Biden said yesterday the committee made an overwhelming case. Should we be expecting a criminal referral?

Kinzinger said, “Look, again, I think the question of criminal referral really doesn’t have much of a point because DOJ is moving forward anyway. It’s not a mandate, but I think we’re certainly going to address that issue and we’ll have more to come on that when we make that decision but regardless, it looks like DOJ has already begun this investigation. I take a lot of pride in two things, number one, our mandate is to tell the American truth, come up with fixes. I know that my kid and I know that, you know, the craziest conspiracy theories kid in ten years is going to believe that it was Donald Trump that started January 6th, so all these conspiracies today will go away, largely because of the work we’ve done. I also know that the Justice Department appears to be pursuing this pretty hard.”