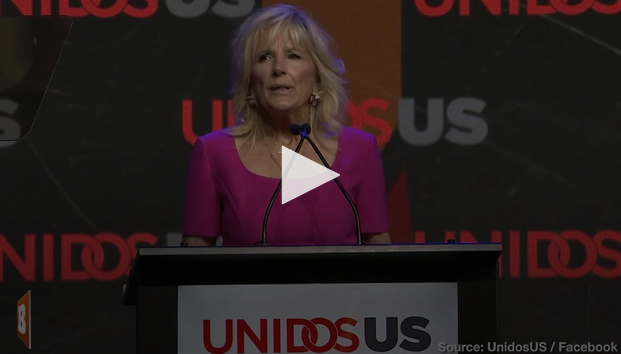 (breitbart) – First Lady Jill Biden butchered the pronunciation of “bodega” and asserted that the Hispanic community is “as unique as the breakfast tacos here in San Antonio” while speaking at the Latinx IncluXion Luncheon in the Texas city Monday.

Biden’s remarks at the luncheon were part of the three-day UnidosUS annual conference in San Antonio, which started Saturday.

“Raul helped build this organization with the understanding that the diversity of this community – as distinct as the bogidas of the Bronx, as beautiful as the blossoms of Miami, and as unique as the breakfast tacos here in San Antonio – is your strength,” she said, referring to Raul Yzaguirre, who received the Presidential Medal of Freedom Thursday. Based on prepared remarks released by the White House,  she intended to say “bodega,” and her faux pas quickly made the rounds on social media.

“Once again, Dr. Jill Biden butchers the Spanish language in furtherance of pandering to a client constituency (the org FKA National Council of La Raza),” tweeted Jorge Bonilla, director of the Media Resource Center. “I hereby bless your timelines with Dr. Jill’s rendering of ‘bodega’”

“Maybe if we rebrand the Southern Border as SouXern BorderX, Joe Biden will finally visit?” she wondered in another tweet.

Garcia’s tweet apparently alluded to the event’s name being the Latinx IncluXion luncheon. The woke term “Latinx” lacks gender, which is crucial to the Spanish language, and polls have repeatedly shown that America’s Hispanic community rejects the word in favor of the masculine “Latino” or the term “Hispanic.” ICR-Miami for Americano Media poll from March revealed just 1.7 percent of the U.S. Hispanic population uses “Latinx” while 60 percent describe themselves as “Hispanic” and 30 percent use the term “Latino.”

The congresswoman tweeted a gif of a previous gaffe from the first lady at “a pop-up vaccination site for farmworkers” in California in March 2021, as Breitbart News reported, where she mispronounced what seemed to be “si se puede.”