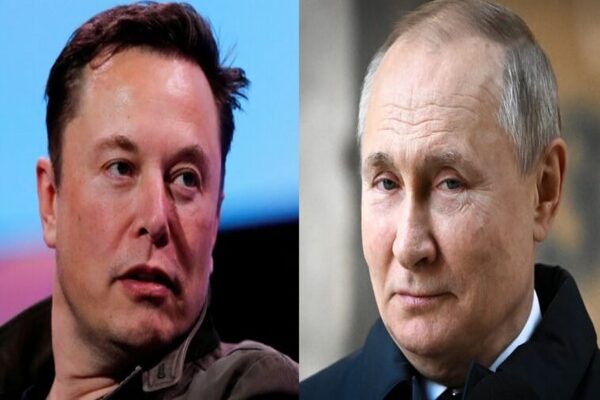 (trendingpolitics) – Elon Musk reportedly met privately with Russian President Vladimir Putin two weeks ago to discuss peace negotiations to avoid nuclear war. The report comes according to Ian Bremmer, who disclosed the information in an email to Eurasia Group subscribers.

As reported by Business Insider, “Musk told Bremmer that Putin said he was ‘prepared to negotiate’ under the conditions that Crimea remains under Russian control, that Ukraine remained neutral, and that Russia’s annexations of Luhansk, Donetsk, Kherson, and Zaporizhzhia were enforced.”

According to Bremmer, Putin also told Musk these were goals he would accomplish “no matter what” or else he would turn to “major escalation.”

Musk recently sparked controversy by advocating that Russia and Ukraine pursue peace talks before there is a nuclear exchange.

“This is highly likely to be the outcome in the end – just a question of how many die before then,” he added. “Also worth noting that a possible, albeit unlikely, outcome from this conflict is nuclear war.”

He followed up on the poll:

“Let’s try this then: the will of the people who live in the Donbas & Crimea should decide whether they’re part of Russia or Ukraine,” he asked.

They were almost a complete reversal of the prior poll, raising questions about whether or not the tweets had been targeted by fake users/bots on either side. Both polls easily cleared two million votes.

As for Ukrainian President Volodymyr Zelenskyy, he has already rejected peace talks.

Zelenskyy earlier called for a ‘preemptive strike’ to purportedly stop Russia from launching a nuclear attack.

At a Democratic Party fundraising event in New York in October, President Joe Biden said that the world risks nuclear “Armageddon” for the first time since the Cold War and that he is trying to find Russian President Vladimir Putin’s “off-ramp.”

“We have not faced the prospect of Armageddon since Kennedy and the Cuban missile crisis” in 1962, Biden said at the event.

Putin is “not joking” when he threatens to use nuclear weapons, Biden added, and “we are trying to figure out what is Putin’s off-ramp. Where does he find a way out?”

Karine Jean-Pierre was then confronted with the president’s remarks and denied that there was any new intelligence to suggest a nuclear exchange was imminent.

“Did the president plan to use the word Armageddon?” a reporter asked. “Why did he choose that particular reference to Revelation 16:16?”

Jean-Pierre replied, “OK, so Russia’s talk of using nuclear weapons is irresponsible. And there’s no way to use them without unintended consequences. It cannot happen. We won’t be intimidated by Putin’s rhetoric. We have not seen any reason to adjust our own nuclear posture, nor do we have indications they are prepared to use them. But Putin can de-escalate this at any time, and there’s no reason to escalate.”

“Why were those comments made for the first time in front of a group of donors rather than a press conference or a public type of forum?” another reporter asked.

“The president’s comments have been very consistent,” Jean-Pierre replied. “He was reinforcing what we have been saying, which is how seriously we take these threats about nuclear weapons as we have done when the Russians have made these threats throughout the conflict. So the kind of irresponsible rhetoric we have seen is no way for the leader of a nuclear-armed state to speak and that’s what the president was making very clear.”

“Do you have new intel that caused the president to ratchet up the level of concern?” a different reporter asked.

“No, no,” Jean-Pierre reiterated. “The president was speaking about concerns about Putin’s threats to use nuclear weapons just as he did at the UN General Assembly.”

“So there’s no imminent threat?” the reporter followed up.

“No,” Jean-Pierre responded. “I said before, we have not seen any reason to adjust our own strategic nuclear posture, nor do we have indications that Russia is preparing to imminently use nuclear weapons.”

Previous article
VIDEO: This Isn’t Going To End Well For Joe Or Hunter Biden
Next article
BIG: Jen Psaki Has Some Nasty News for Democrats