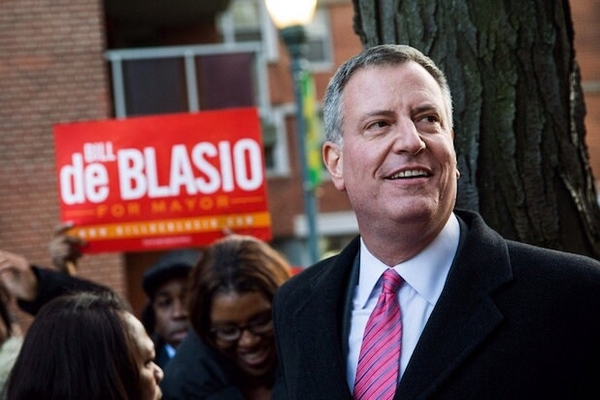 Most New York City workers who are seeking an exemption from getting a coronavirus vaccine will likely be denied, and “the vast majority are going to get vaccinated,” Mayor Bill de Blasio (D) said Monday during a ‘media availability.’

At that event a reporter asked de Blasio, who has made it increasingly difficult for individuals to avoid vaccination, the status of the exemption requests in the city.

Early last month, the Democrat mayor revealed that roughly 12,000 city workers had sought exemptions, and that most would likely not get the accommodation: “I don’t want to prejudge except to say what we know from previous experience is that it was – certainly looking at Department of Education, we got a lot of requests for exemption,” he said at the time. “Relatively few were granted.”

However, at Monday’s event de Blasio said they are currently not seeing any staffing challenges, although he did not have the exact number of accommodation requests denied and granted.

“We have started to see those reasonable accommodation requests work through. For folks who have been told after the whole process that they don’t get the accommodation, I think so far we’re seeing what we’ve seen before,” de Blasio said,  explaining that those people are typically getting vaccinated after all.

“So they exhaust their options and if it doesn’t go their way, most people choose to get vaccinated,” he said, noting they have seen some increases “in the last week or so,” attributing it to “that process beginning to play out.”

Those waiting for a response to their request, he continued, will “work in the meantime.”

“As these get resolved, if someone gets the accommodation, they keep working. If they don’t, the vast majority are going to get vaccinated,” he said, echoing what he said last month, when he admitted the religious exemptions have “pretty narrow criteria.”

“So I think you’ll see a number of people ultimately find that the exemption is not approved, and then they still have that chance to correct, get vaccinated, come back,” he said at the time.

In addition to forcing city workers to get the jab, de Blasio is also implementing a vaccine mandate for private sector employees. Additionally, he is extending the city’s vaccine passport program’s requirements to children ages 5-11, compelling businesses such as indoor restaurants to discriminate against unvaccinated children.

Previous article
WOW: Trump Comments On Ron DeSantis – This Is HUGE!
Next article
BREAKING: Joe Biden Gets Welcome He Was Not Expecting – This Is Hilarious(VIDEO)