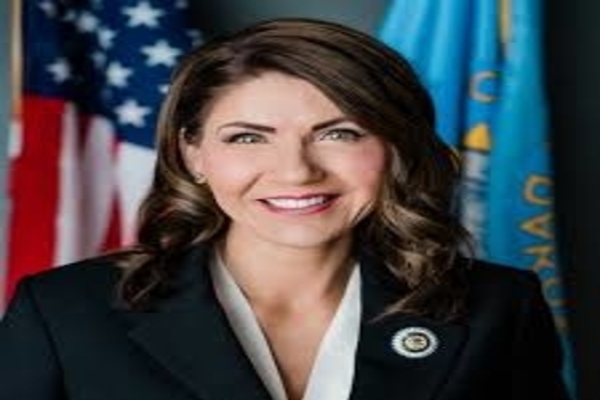 If both Democrats win in the upcoming U.S. Senate runoffs, the Senate would deadlock at a 50-50 tie leaving Vice President-elect Kamala Harris to cut ties, giving control of the chamber to Democrats.

Noem, who resisted lockdowns and mandates in response to coronavirus in her state of South Dakota, spoke here at Jessie’s Restaurant, taking questions from conservatives gathered for her appearance.

Consequences of a potential Democrat victory were put in realistic terms, people nationwide would take a serious personal financial hit because of the leftist policies a Democrat-controlled Congress and President-elect Joe Biden would be able to force upon the public without checks and balances.

If we let Ossoff and Warnock get into the United States Senate, people will have less money in their pockets, absolutely, and their paychecks will be smaller next year. In two years, we’ll be back to $4 or $5 a gallon gasoline,” Noem said. “Heating your home is going to increase by at least 30 to 40 percent. Ask moms and dads who are busy out there trying to pay their bills today if they can afford that. That’s just real-life everyday stuff. All their food is going to cost more at the grocery store because of overregulation and their unwillingness to give us free and fair trading deals with other countries. There are real consequences to that outside of the whole freedom and Constitution argument we’ve been making all along. A lot of people today haven’t done their homework about what Marxism and socialism mean. But they do care about: ‘ Can I pay the rent next month?’ We need those real-life conversations.”

“it was interesting to me to listen to them talk,” the South Dakota governor told the group here. “I thought Kelly did a fantastic job. What was interesting to me about the debate is several times she asked him to denounce Marxism and socialism and he refused. I think right there is the answer for this election and what’s going to happen on Tuesday.”

“People ask me all the time why I’m back here in Georgia today, and it’s because the consequences of what happens on Tuesday will impact the people of South Dakota,” Noem said. “it will impact all the people of this country. It really is a choice between sending two people, Kelly and David, who love this country and really want to preserve it for our kids and grandkids, and two extremists who want to change this country into something that will completely take away the American dream and the opportunity that we’ve always had. So that’s why I’m here, and I think if we’re going to have a real honest conversation- probably none of you knew who I was a year ago. Probably the reason why you even know my name today is because the liberals have been so busy kicking me in the head for all the decisions I’ve been making for my people in South Dakota because of COVID-19. So I think it’s important for you to understand why I made those decisions, and it’s good to understand just a little bit about me. I’m just a farmer and rancher. I’ve run several different businesses, a hunting lodge, a restaurant, and an insurance agency. I ran for Congress and served there for eight years and then I decided to run for governor because I recognized governors are CEOs and governors make decisions every day that can impact families. So when I ran for governor it was on South Dakota being an example to the nation. I believe because we were small we could do things a lot of other states couldn’t do- that we could be a pilot project for a lot of conservative things and we could show the rest of the country that what we believe really does create opportunity in this country.”

“When I first got to Congress, I had served in our state legislature in South Dakota—I ran in 2010 because people had asked me to for two years and I ended up winning,” Noem said. “I ran against a ‘Blue Dog Democrat,’ one of the last few who was left, and she had a 70 percent approval rating and didn’t vote for anything difficult—didn’t vote for the stimulus package, didn’t vote for Obamacare, she had only voted for Pelosi as Speaker. When I won, I got to D.C. and I recognized why everything was so broken, and I recognized it was because I could not get a hearing on a bill unless the committee chairman decided to have a hearing. Now, in the South Dakota legislature, if I write a bill it gets filed and it automatically gets a hearing in the committee. That’s not true in Washington, DC. The only way a bill ever sees the light of day is if the committee chairman decides they want to hear it. There are people in D.C. who have been filing bills on good policy for 20 years that they’ve never even had the chance to debate. Now, let’s say they do hear your bill and actually pass it, there’s no chance it will go to the floor for a vote. The only way it will ever get voted on the floor is if the Leader decides they want to vote on it. You could pass that committee unanimously and have incredible support and the only way it’s ever going to get voted on the floor is if the leader decides they want to put it on the floor for a vote. Then if it ever gets passed through the House or the Senate, there’s no guarantee the other body is going to even look at it. They completely ignore each other. In South Dakota, if you pass the committee, three days later it’s voted on on the House floor. If it passes the House, it has to be heard in the Senate in committee by a crossover day, and then if it passes there it goes to the floor. There’s no process like that in Washington, DC. Leadership controls everything, and it’s all on what they decide to do and what their agenda. Who controls the committees are incredibly important, and so if you have somebody in control of that committee who doesn’t care about whether we have family farms out here, that we have diversified farming practices, that’s a national security issue. They only care about getting more people on government programs so they can control them. That changes this country faster than anything else.”