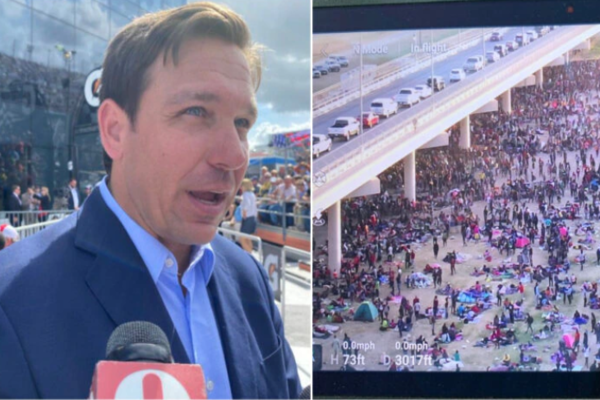 (bigleaguepolitics) – Florida Governor Ron DeSantis suggested he’d implement a program to transport illegal aliens dumped by the Biden administration in Florida to Delaware, a move that would force the affluent Democrat state to bear the brunt of the burden created by Biden’s open borders.

DeSantis made the proposal to send illegal migrants to Delaware on buses in a Wednesday press conference. The Biden administration has transported tens of thousands of illegal aliens to states such as Florida since taking power.

“If they’re going to come here, we’ll provide buses… I will send them to Delaware. If [Biden] is not going to support the border being secured.”

Peniless and destitute aliens are often totally dependent on the state and federal government for their livelihood. DeSantis’ proposal could be achieved through payments to the illegals, many of whom are eligible for more services and public gimmes in blue states such as Delaware. Suburban Democrats are notoriously paranoid about the prospect of imposing a third-world social model in their own communities, intent to downgrade the living standards in red-leaning jurisdictions exclusively.

Illegal aliens impose significant costs on the communities in which they’re resettled by the federal government, including welfare, education, and public service expenses, in addition to lowering the quality of life of American citizens.

DeSantis has proposed several state policies to deter and halt human smuggling operations largely tolerated by the Biden administration, placing renewed focus on the issue after an illegal alien who entered the country falsely claiming to be an unaccompanied minor was arrested and charged with murdering a Jacksonville man. Yery Ulloa had been jetted into Florida by the Biden administration just weeks before.

Ted Cruz has proposed relocating illegal alien processing centers from hardscrabble communities on the US-Mexico border to elite Democrat havens such as Martha’s Vineyard and Palo Alto, in essence forcing the liberal elite to deal with the problems they consistently seek to impose on their fellow Americans.