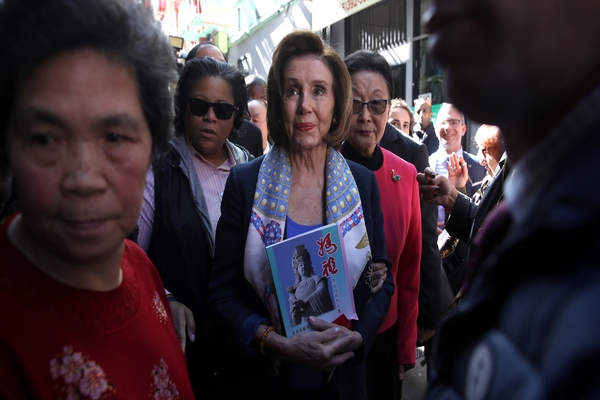 A year ago this week, Nancy Pelosi was walking the streets of San Francisco’s Chinatown without any concern whatsoever for her personal safety.

Nancy Pelosi’s face was stark naked. She wasn’t wearing a mask, neither were the dozens of people who surrounded her.

A local C.B.S. affiliate was on the scene following all of it, but even the coronavirus was already spreading all over the world in places like France and South Korea, and we now know here in the U.S., C.B.S. didn’t suggest that anything was amiss. They didn’t report that Nancy Pelosi was a walking biohazard or a super spreader.

And why would they think that? Just days earlier, Tony Fauci had gone on television and promised Americans that the risk of coronavirus infection in this country was, quote, “minuscule.”

So, if Tony Fauci’s word meant anything and at the time, people thought that it did, Nancy Pelosi’s walk around Chinatown wasn’t alarming; it was heroic.

Pelosi herself was explicit on that point, quote, “We want to say to people come to Chinatown. Here we are. We’re careful. We’re safe. Come join us.”

In other words, if you’re worried about catching the virus by gathering in a big crowd in Chinatown, that means you’re a white supremacist.

So, if you’re a reasonable person, you might call for an investigation into this: What’s causing these attacks? How can we stop them?

But if you tune in to CNN or MSNBC, you already know why they’re happening. Donald Trump, yes, the great orange menace may not be in the White House anymore; he may not have gotten any votes at all in San Francisco, but don’t be fooled. Donald Trump is the reason this is happening.

And that sends a larger message to the rest of us from our political class and their servants in the media. Never blame the people in charge.

That’s a familiar refrain. We’ve heard it a lot over the last 12 months, and for the most part, it has worked. Propaganda usually does, and that’s why we’re going to spend the next hour highlighting the politicians and the bureaucrats who have not been held accountable for what they did to this country during the pandemic.

But if you confront them on any of these questions, they will tell you reflexively; it’s someone else’s fault.

No single politician has used this tactic more often or more shamelessly, as the Governor of New York State, Andrew Cuomo. Cuomo accepted an Emmy award last year for performances like these when the pandemic was beginning last spring.

GOV. ANDREW CUOMO (D-NY): … strategy, plan of action all along. Step one, flatten the curve.

In other words, we’re all talking about this curve, flatten the curve.

We’re trying to flatten the curve.

And we have to flatten the curve.

We’ve reduced the rate; we so-called flattened the curve. Flatten the curve.

Boy, that’s a great slogan. What does it mean exactly? What is flattening the curve? Well, not many people bothered to ask that question.

For New Yorkers last year, flatten the curve became the new version of 15 days to slow the spread. Just a series of words arranged in order so politicians can repeat them over and over to convey the impression they were in charge and doing something to fix the problem.

In reality, Andrew Cuomo spent most of his time sitting for interviews with his brother over on CNN and having staffers write a book under his name. That book was called “American Crisis: Leadership Lessons from the COVID-19 Pandemic.”

Well, we took a look at some of the top customer reviews for the book on Amazon.com; people actually read it. Here’s the top review right now, quote: “A heartfelt and caring look at how it feels to murder people through bureaucratic ineptitude.”

Here’s the next review on Amazon.com at the moment, quote: “Governor Cuomo’s self-serving book raises embarrassing questions. Politicians being human, make mistakes; Andrew Cuomo, as scientists agree, made a serious error that led to thousands of unnecessary tragic deaths in nursing homes. Shouldn’t a politician like Cuomo have a moral obligation to admit his error, even as in this case, it is likely to lead him losing his position, his chance to be President of the United States and lawsuits?”

Well, that’s a good question. Doesn’t he have a moral obligation to do that? As that reviewer noted, in March of last year, Andrew Cuomo ordered nursing homes in the state to admit patients who had tested positive for the coronavirus.

Then Cuomo’s administration hid the total number of nursing home deaths that resulted from that order.

We’re not speculating about that; one of his staffers admitted they did it. But Andrew Cuomo himself still has not acknowledged that he did this or any wrongdoing whatsoever and said last week, he blamed the people who work in nursing homes.

CARLSON: So case closed. I am not responsible for the 11,000 nursing home deaths in New York or the coordinated effort to cover up those deaths. You know who is responsible? The nurses, the receptionist making 35 grand a year, they must suffer. Their lives must be ruined so that Andrew Cuomo can keep his job and his Emmy Award.

But we don’t mean to single out Andrew Cuomo. He is not the only incompetent politician who needs to save face and will lie and hurt others in order to do it.

Our public health experts are scrambling to avoid humiliation too, and there’s a lot of it waiting for them. And if that means isolating the most vulnerable members of our society even more than they’ve already been isolated, then that’s the cost. It’s collateral damage. It’s a price they’re willing to pay because they don’t pay it.

This is a real article published by N.B.C. News earlier this month. It lays out word for word. We’re reading from it verbatim. Quote, “After grandparents or older parents received the coronavirus vaccine, can you visit them? The answer is likely no. But it depends. One expert from Northwestern University said essentially nothing changes after the vaccine.” End quote.

Again, nothing changes after the vaccine. It’s hard to believe they’re saying this, and it’s not just one so-called expert from Northwestern saying that. Tony Fauci himself is saying it, too, quote: “Until we have the overwhelming majority of people vaccinated and the level of virus is very low,” Fauci said this month,”… you probably shouldn’t visit your grandparents without your mask on. It’s just too early to be doing something that reckless.” human contact with the ones you love most.

Breaking people out of their prisons of solitude, don’t dare, even after the vaccine.

Tony Fauci wants to take it slow. On the other hand, Fauci is still capable of acting very, very quickly, as long as the right interests are involved, as long as he is profiting from it or his allies are. We’ll give you one of many examples.

Tony Fauci has already decided without any hesitation whatsoever that the World Health Organization deserves billions of your money right away, U.S. tax dollars.

Now, the World Health Organization is the group that could have warned the rest of the world about the pandemic, could have saved lives but chose instead to repeat Chinese propaganda instead.

Your grandmother can wait, according to Tony Fauci, but bureaucrats at W.H.O.’s headquarters in Switzerland need the cash, and they need it now.

DR. ANTHONY FAUCI, DIRECTOR, NATIONAL INSTITUTE OF ALLERGY AND INFECTIOUS DISEASES: I join my fellow representatives in thanking the World Health Organization for its role in leading the global public health response to this pandemic.

And as such, I am honored to announce that the United States will remain a member of the World Health Organization.

CARLSON: What a malignant buffoon. History will indeed his behavior.

So you’re still waiting for your stimulus check; the W.H.O. is not waiting for their money; they’re getting it. But it’s not just W.H.O.

According to The Daily Caller, the lab in Wuhan where this pandemic likely started, the Wuhan Institute of Virology will continue to receive American taxpayer funding for the next several years. It’s hard to believe that’s real. It is. Tony Fauci himself has supported research at that lab.

It’s enough to blow your mind. Again, the people responsible for this pandemic aren’t facing consequences. Instead, they are getting U.S. tax dollars. The consequences fall where they always do: on the American middle class.

So if you unleash a deadly virus on the world or cause thousands of deaths in nursing homes, or fail to warn the world in order to appease your masters in China, you get millions.

But if you’re just a waitress in Brooklyn dealing with the fallout of all of this and you step out of line for a moment, you’re done.

UNIDENTIFIED FEMALE (voice-over): The 34-year-old says she was fired after telling her employer she and her husband are considering starting a family, and she had hesitations about getting the COVID-19 vaccine.

QUESTION: Do you think it’s fair for a workplace to be able to determine whether or not its employees should be vaccinated?

BONNIE JACOBSON, WAITRESS FIRED BY EMPLOYER FOR REFUSING COVID-19 VACCINE: I don’t. I don’t. You know, especially in a situation like mine, I asked for a little more time. That’s a very legitimate reason.

CARLSON: Yes, this is someone who doesn’t oppose the vaccines, who is thankful for vaccines, like most Americans, but who simply has questions. That’s the person who is suffering.

Is that fair? No. But it’s happening everywhere.

The people in charge of this country, your politicians, your bosses, the public health experts, especially Bill Gates, all of a sudden they have more power than they’ve ever had, including over your personal life, certainly over the lives of your children.

They can’t go outside or attend class in many states right now. But don’t worry, it’s for their own good. Randi Weingarten is the President of the American Federation of Teachers. That’s the second-largest teachers union in the country. She’s not a doctor. She’s not a scientist. She’s a lawyer.

But according to Randi Weingarten, medically speaking, your kids shouldn’t be anywhere near a school.

DAN PRIMACK, BUSINESS EDITOR, AXIOS: Is there a point in which kids have been out of physical in-person school for so long that the education that they’ve lost isn’t really recoverable? The third grade, the fourth grade, the kindergarten they lost, they can take extra semesters in the summer, they can do — but it can’t really be fixed?

RANDI WEINGARTEN, PRESIDENT, AMERICAN FEDERATION OF TEACHERS: No. I don’t believe that. I believe that kids are resilient, and kids will recover.

CARLSON: Really? Randi Weingarten, how many kids do you have? Kids are resilient. They’ll recover. Yet another promise we’ve heard during this pandemic. Get the vaccine; your life will return to normal. That wasn’t true.

Why should we believe any of this is true? And who’s going to be held responsible for these lies?