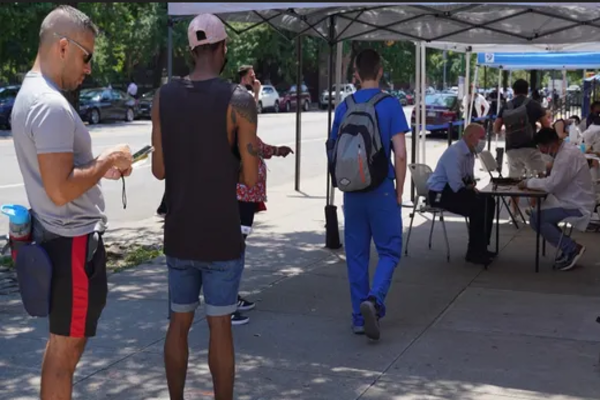 BREAKING: Outbreak In New York Of Monkeypox – 30 Percent of U.S. Cases Are…

(breitbart) – An official in New York City reports a spike in monkeypox cases where incidents more than doubled in the past week. The official states the outbreak in the nation’s largest city accounts for 30 percent of all U.S. cases.

Manhattan Burrough President Mark D. Levine tweeted a chart released this week from the New York City Department of Health and Mental Hygiene revealing a dramatic spike in the number of monkeypox cases in the city. Between July 1 and 13, New York health officials report more than 170 cases of monkeypox.

“It was another day of meltdown in NYC‘s monkeypox vaccinatation [sic] effort, caused by severe lack of supply and failed scheduling technology” Levine tweeted. He added that New York City is now recording 30 percent of the total number of U.S. cases but is only receiving 10 percent of the national vaccination supply.

NYC Health also published a chart breaking down the demographics of the monkeypox cases in the city. Men account for 321 of the 336 reported cases (95.5 percent) as of July 13, the report states. The report states that no women contracted the virus during the reporting period. Health officials attributed the remaining to TGNCNB (Transgender and Gender Non-Conforming Non-Binary) (7 cases), and Unknown (8 cases).

Officials attributed 60 percent of the cases (201) to the LGBQ+ community. Another 40 percent were classified as unknown.

Whites accounted for the largest classified block of cases (101). However, more than 35 percent were not attributed to any race. Latino/Hispanics accounted for the next largest demographic (65 cases) followed by Blacks (38 cases).

NYC Health officials tweeted the following video showing how to help prevent the spread of monkeypox.

He added that the medicine for treating the monkeypox infection is more of a shortage than the limited vaccine supply.

Previous article
BREAKING: Top Democrat Does It AGAIN – Chuck Schumer Mad As Hell
Next article
POLL: Most Democrats Believe the Constitution is “Racist” and “Sexist”