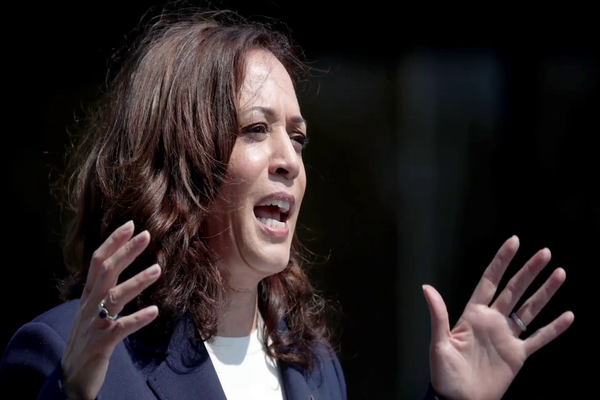 (breitbart) – Vice President Kamala Harris delivered a speech alongside Jamaican Prime Minister Andrew Holness on Wednesday in which she struggled to convey that the United States would be providing economic assistance to the island nation, confusedly saying, “One of the issues … that is economic in the way of its impact has been the pandemic.”

Speaking at the White House with Holness, Harris stated the U.S. would help repair the Jamaican economy, which was impacted by the Chinese pandemic. Her remarks were hard to follow and largely unclear, denoting consistent communication blunders that have beset Harris for months.

“We also recognize — just as it has been in the United States for Jamaica — one of the issues that has been presented as an issue that is economic in the way of its impact has been the pandemic,” she said while continually glancing at her notes.

“So to that end,” she said, seemingly trying to make sense of her notes, “we will assist Jamaica in COVID recovery by assisting in terms of the recovery efforts in Jamaica that have been essential to, I believe, what is necessary to strengthen not only, uhhh, the issue of public health, but also the economy”:

During her trip to Poland two weeks ago, Harris seemed to have a difficult time reading her notes while expressing where she was exactly speaking.

Upon returning from Poland, Harris suggested Ukraine was a member of NATO. “The United States stands firmly with the Ukrainian people in defense of the NATO alliance,” Harris declared in what appears to be a now-deleted tweet.

In January, Harris answered a question from NBC News about the White House coronavirus policy and if it would shift in the coming months.

“It is time for us to do what we have been doing. And that time is every day. Every day it is time for us to agree that there are things and tools that are available to us to slow this thing down,” Harris insisted without much specificity:

When NBC’s Lester Holt asked her in the summer of 2021 if she had traveled to the border to inspect Biden’s southern invasion, she replied, “And I haven’t been to Europe”:

The communication blunders come during and after multiple communication staffers have defected from Harris’s office. According to reports, her office has been tossed to and fro by “disorder, bad press, and, at times, internal frictions” because of Harris’s reported “abusive environment,” where staffers have been “treated like shit” and have had a slew of resignations and departures in recent months during political “shitshow” resets. Harris has tried to resolve the issues by hiring new help. Her latest hire, press secretary Kirsten Allen, deleted more than 10,000 tweets before accepting her position with Harris, according to Social Blade.

Social Blade does not track which tweets were deleted, but with Allen’s former employers being disgraced by Floridian gubernatorial candidate Andrew Gillum and the Democrat Congressional Campaign Committee, speculators have “raised questions about the content on her page before it was scrubbed.”