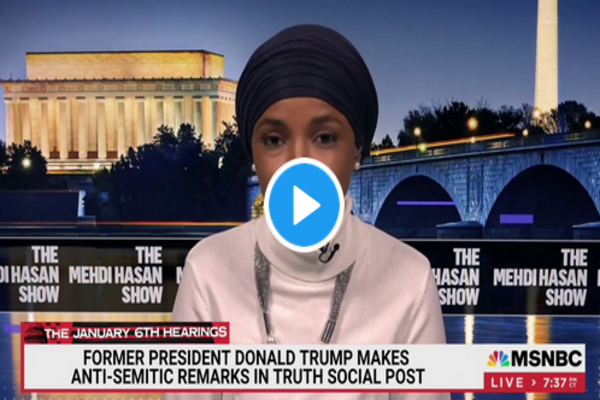 “Somalia-born Democrat Rep. Ilhan Omar (MN), notorious for her antisemitic sentiments, was ripped online after she accused former President Donald Trump of antisemitism while being a featured guest on the subject despite her personal history of antisemitic rhetoric,” reports Breitbart.

“Appearing on MSNBC’s The Mehdi Hasan Show on Sunday night, Omar, addressing the former president’s recent remarks suggesting American Jews be more appreciative of all he had done for Israel while president, called out Republican ‘hypocrisy,'” reported Breitbart.

“The hypocrisy of the Republicans is blatantly clear, as they are not rushing out to condemn the former president who, knowingly, repeatedly invokes dual loyalty tropes that are harmful and dangerous,” Omar said.

“To continue to have someone as the former president with his platform continuously speaking to his white supremacist base in such a language — it’s very scary and dangerous and we have to condemn it in the strongest ways possible,” she added.

Immediately, many took to the socials to call out the irony of Omar speaking out against antisemitism.