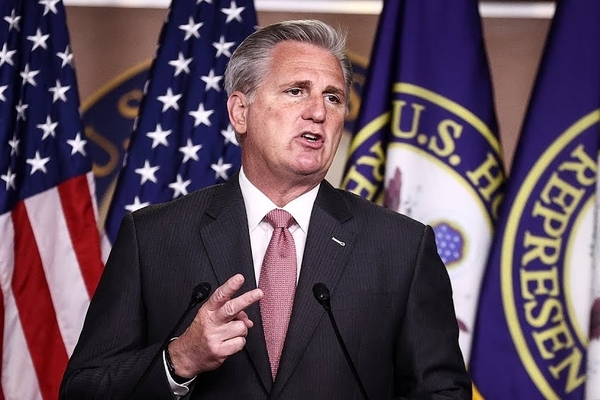 (breitbart) – Republicans nominated House Republican Leader Kevin McCarthy (R-CA) on Tuesday to be the next Speaker of the House.

House Republicans selected McCarthy to become the 53rd Speaker of the House as Republicans are now slated to win back the House majority.

McCarthy received 188 votes, beating Rep. Andy Biggs (R-AZ), a former Freedom Caucus chairman, who received 31 votes. After the vote, there was reportedly lots of cheering in support of McCarthy.

The House will have to vote on making McCarthy speaker in early January, meaning that McCarthy will have to garner 218 votes within the next few months.

McCarthy and House Republicans have campaigned to take back the majority using the Commitment to America agenda, a legislative agenda to alleviate many of the crises unfolding under President Joe Biden and also increase oversight over the Biden administration.

Many House conservatives, including House Freedom Caucus members, have sought rule changes as a condition for supporting McCarthy for speaker, including:

McCarthy said on day one of taking back the House they would pass a bill that would repeal the 87,000 IRS agents hired under the $700 billion Inflation Reduction Act. He has also said he would eliminate proxy voting.

(trendingpolitics) - New York’s entirely estimable Rep. Alexandria Ocasio-Cortez is at it again with the hysterics and begging for attention, this time saying, when interviewed...