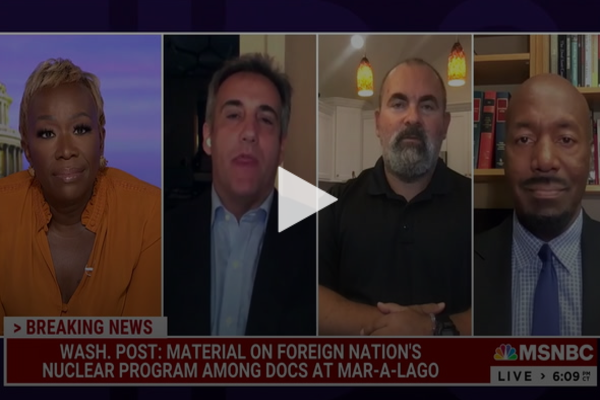 (breitbart) – Former Trump lawyer Michael Cohen said Wednesday on MSNBC’s “The ReidOut” that former President Donald Trump will be indicted for crimes related to the mishandling of classified documents soon.

Cohen said, “I do think there’s going to be an indictment and relatively soon. I believe there will also be congressional hearings with Donald in the hot seat where, you know, either he’ll come in willingly, which I don’t think he will or via subpoena. I mean, the real questions that they have to be asking right now is, you know, where are the documents that were in the empty top secret files that were found at Mar-a-Lago? I mean, that’s really the big question, and who did Donald give them to or show them to.”

He continued, “Like you also said, and I’ve been saying it since day number one, Joy. Donald is a clear and present danger for the national security and safety of this country. And if this doesn’t prove it, I’m not sure anything will. So I agree with you, but I don’t agree with you that he won’t be held accountable for this. This is too big at this point in time.”

Cohen added, “This is all about power for Donald Trump. This is all about him still remaining relevant and exerting the power over the United States as extortion in the event you indict me or members of my family. If you indict me or try to incarcerate me, I have nuclear secrets that I have instructed some of my followers to turn over to our adversaries. That’s what I believe. It’s all about him main taping power not just in this country but in foreign countries as well.”