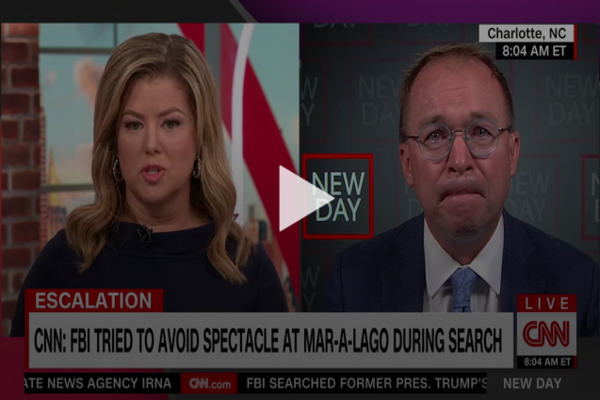 Keilar asked, “This is someone with knowledge inside who told the feds that there was additional material at Mar-a-Lago, directed them where it should be, clearly was concerned enough to tell them this information they should have besides the 15 boxes of material they got in the winter. Does that change your mind? Is that now sufficient when you have someone actually aligned with him drawing the attention of the feds to these documents?”

Mulvaney said, “It certainly is worthwhile and worth noting, no question. It would be valid on getting a search warrant or part of getting a search warrant. The other thing the FBI had to establish, however, was that those documents were in imminent risk of being destroyed or removed from the location. Unless they had evidence that Trump was directing people to destroy documents, and if he was doing that now, why wasn’t he doing that six months ago?”

He added, “When the FBI has the track record it has, in the recent past, about dealing with Republicans, the burden is on them to show that they are absolutely on the up and up. And releasing that affidavit is something they can and should do.”

Keilar asked, “How close do you think that person in Trump’s orbit would have had to be to know these details about where the documents were?”

Mulvaney said, “Really close. I didn’t even know there was a safe at Mar-a-Lago, and I was the chief of staff for 15 months. This would be someone who was handling things on day to day, who knew where documents were, so it would be somebody very close to the president. My guess is there is probably six or eight people who had that kind of information. I don’t know the people on the inside circle these days, so I can’t give any names of folks who come to mind, but your instinct, I think, is a good one. If you know where the safe is, and you know the documents are in 10 boxes in the basement, you’re pretty close to the president.”

Previous article
WARNING: Majority of Babies Born Out of Wedlock for First Time in History
Next article
BREAKING: Democrats Get Humiliating News After Trump Raid – BOOM