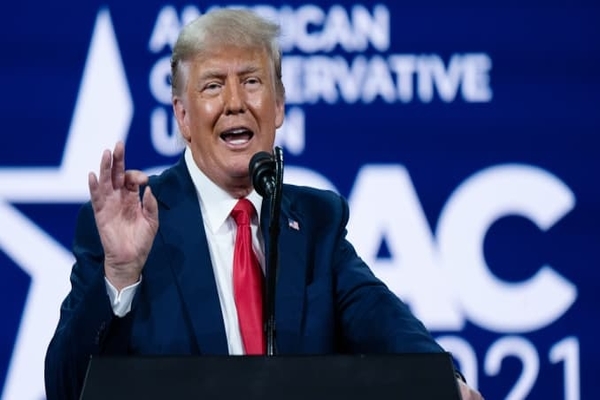 BREAKING: Democrats Seek to Disqualify Him – Americans Are Mad As Hell

(breitbart) – Former President Donald Trump blasted President Biden on Thursday for using his name to “further divide America” on the anniversary of the January 6 protest, deeming it “political theater” designed to distract from Biden’s failures.

“This political theater is all just a distraction for the fact Biden has completely and totally failed,” he continued, listing Biden’s failures on the border, Chinese coronavirus, inflation, energy independence, foreign affairs, and the military.

“Our Country no longer has Borders, has totally and completely lost control of Covid (record numbers!), is no longer Energy Independent, Inflation is rampant, our Military is in chaos, and our exit, or surrender, from Afghanistan was perhaps the most embarrassing day in the long and distinguished history of the United States—and so much more,” he wrote. “Why is it that the Unselect Committee of totally partisan political hacks, whose judgment has long ago been made, not discussing the rigged Presidential Election of 2020?”

It’s because they don’t have the answers or justifications for what happened. They got away with something, and it is leading to our Country’s destruction. They want all conversation concerning the Election “Canceled.” Just look at the numbers, they speak for themselves. They are not justifiable, so the complicit media just calls it the Big Lie, when in actuality the Big Lie was the Election itself.

“The Democrats want to own this day of January 6th so they can stoke fears and divide America,” Trump added. “I say, let them have it because America sees through theirs lies and polarizations.”

Indeed, Biden repeatedly referenced Trump in his January 6 speech — 16 times —  despite telling reporters he does not want to turn the day into a “contemporary political battle between me and the president.”

Biden also accused a “former president of the United States of America” of creating and spreading a “web of lies about the 2020 election.”

“He’s done so because he values power over principle. Because he sees his own interest as more important than his country’s interest, and America’s interest. And because his bruised ego matters more to him than our democracy or our Constitution,” Biden said, also using the speech to attack Republicans.

“They seem no longer to want to be the party, the party of Lincoln, Eisenhower, Reagan, the Bushes,” Biden added.