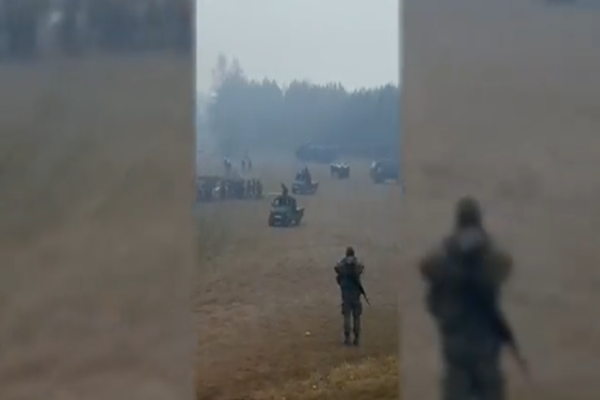 (breitbart) – Polish forces are warning Middle Eastern migrants massed on the Belarusian frontier that they may be met with force if they fail to follow their instructions.

Video from the crisis zone shared by Poland’s Ministry of the Interior and Administration shows loudspeakers warning migrants massed on the border in slightly broken English: “Attention, attention, attention, the police inform: if you don’t follow the orders, force may be used against you.”

The ministry’s footage also shows some of the many border guards, police officers, and soldiers, including activated reservists, who have been deployed to the region — now believed to be around 20,000 strong.

The migrants have sometimes been aggressive towards Polish personnel while trying to break through the border barriers at the scene, threatening soldiers with shovels and stoning police officers.

Belarusian forces believed to be orchestrating the migrants’ movements are also accused of trying to provoke the Poles, harassing them with blinding lasers and strobes and arming the migrants with tear gas, as well as damaging border fortifications.

Poland’s determination to defend its thickly-wooded land border with a hostile neighbour stands in marked contrast to the attitude taking by Britain, which is ironically sending a small detachment of military engineers to support Poland’s efforts to reinforce their border even as they allow boat migrants to pour across the much more easily defensible English Channel by the thousands.

Only recently did the Priti Patel-led Home Office, which has broad responsibility for crime, border control, and national security with the Boris Johnson administration, authorise Border Force to turn boat migrants back to safe, first world France in limited circumstances — although it is yet to actually happen and Border Force officials are briefing the press that they believe it will never happen.

The reason for this can perhaps be explained by senior officials not being particularly interested in border control, with Border Force chief Paul Lincoln — annual salary £135,000 ($180,000) — recently reported as having given a speech in which he said: “We’re all human beings, we’re all mammals, we’re all rocks, plants, rivers. Bloody borders are just such a pain in the bloody ass.”