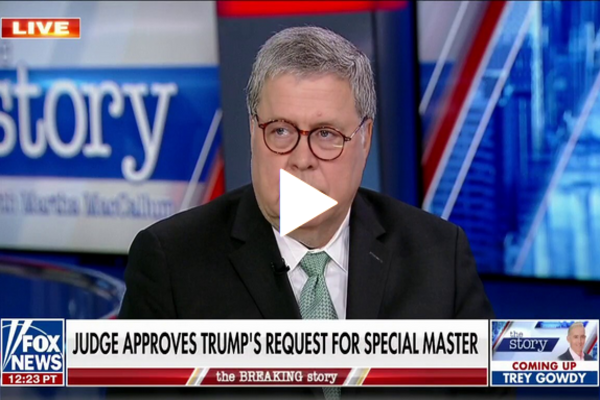 (breitbart) – Former Trump Attorney General Bill Barr said Tuesday on FNC’s “The Story” that a federal judge agreeing to a special master in the Trump Mar-a-Lago FBI raid saga was “wrong” and would be overturned if the Department of Justice appeals.

Barr said, “The opinion, I think, was wrong, and I think the government should appeal that. It was deeply flawed in a number of ways. I don’t think the appointment of a special master is going to hold up. Even if it does, I don’t see it fundamentally changing the trajectory. In other words, I don’t think it changes the ball game as and so much as we will have a rain delay for a couple of innings.”

He continued, “But the fundamental dramatics of the case is the same, which is the government has strong evidence of what it needs to determine whether the charges are appropriate, which is government documents were taken, classified information was taken and not handled appropriately, and they are looking into some evidence that suggests they were deceived. None of that really relates to the content of documents. It relates to what the fact there were documents there. The fact that they were classified and the fact that they were subpoenaed and never delivered. They don’t have to show the content, you know, specific advice given in a memo, for example, in order to prevail in this case. I think it is not really going to change the decision.”

MacCallum asked, “Do you think the special master will be overturned on appeal by the DOJ?”

Barr said, “I think if the DOJ appeals, eventually it will be overturned.”