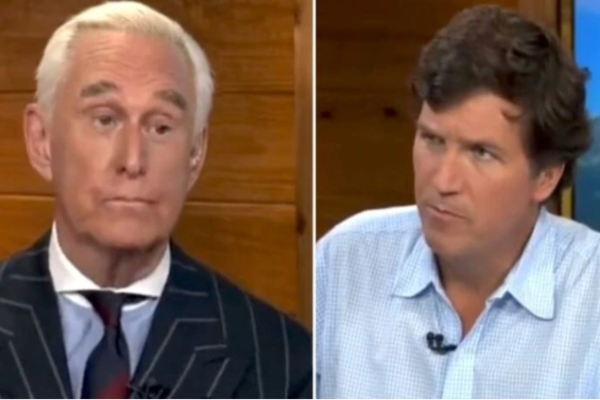 (bigleaguepolitics) – As more evidence comes out to shed light on what truly happened when the US Capitol building was stormed on January 6th, more Americans have come to doubt whether the account of actors in both the White House and administrative state is truly an accurate representation of what happened that day. The media has been equally complicit, intentionally lying ever since.

Actors in the media even went as far as to maliciously invent a fictional story of a U.S. Capitol Police Officer being bludgeoned in the head to death by a murderous mob of Trump supporters. It turned out that Officer Brian Sicknick had tragically died, but from a different circumstance confirmed to have not involved any kind of blunt force trauma.

The latest bombshell of what appears to look more like a setup every day comes from Roger Stone. Appearing on Tucker Carlson Today, Stone said the Secret Service called him one day asking if he wanted them to “escort” him to the Capitol Building. He declined the offer and noted how conspicuous the timing was. Had Stone accepted the offer at the time of the call, he would have arrived at the Capitol just before the storming began.

Stone also noted that his friends Alex Jones and conservative activist Ali Alexander had received offers to be escorted to the capitol as well at around the exact same time.

“I think I was being set up. I mean, here’s the amazing thing, and that is I watched the President’s speech from my hotel room at the Willard Hotel, and then there was a call on the house phone and two agents from the Secret Service wanted to escort me to the Capitol. Now, I’ve been in politics for a long time. Secret Service doesn’t do political chores. They never have. I would have gotten there had I left at that moment at the exact time that these folks broke into the Capitol. Now I know that my friends, Alex Jones and Ali Alexander, are approached by the Secret Service and asked if they want an escort to the Capitol at the same time.”

As more evidence of involvement by US government agents in the January 6th Capitol riot comes to light, the suspicions of many Americans have continued to rise. Even supposed ‘non-partisan’ actors of the administrative state have shared their opinions on the matter, including Dr. Anthony Fauci, who obfuscated responsibility for his alleged crimes against the American people last month when he suggested that Senator Ted Cruz should be prosecuted for legally objecting to the certification of the electoral college in the 2020 election.